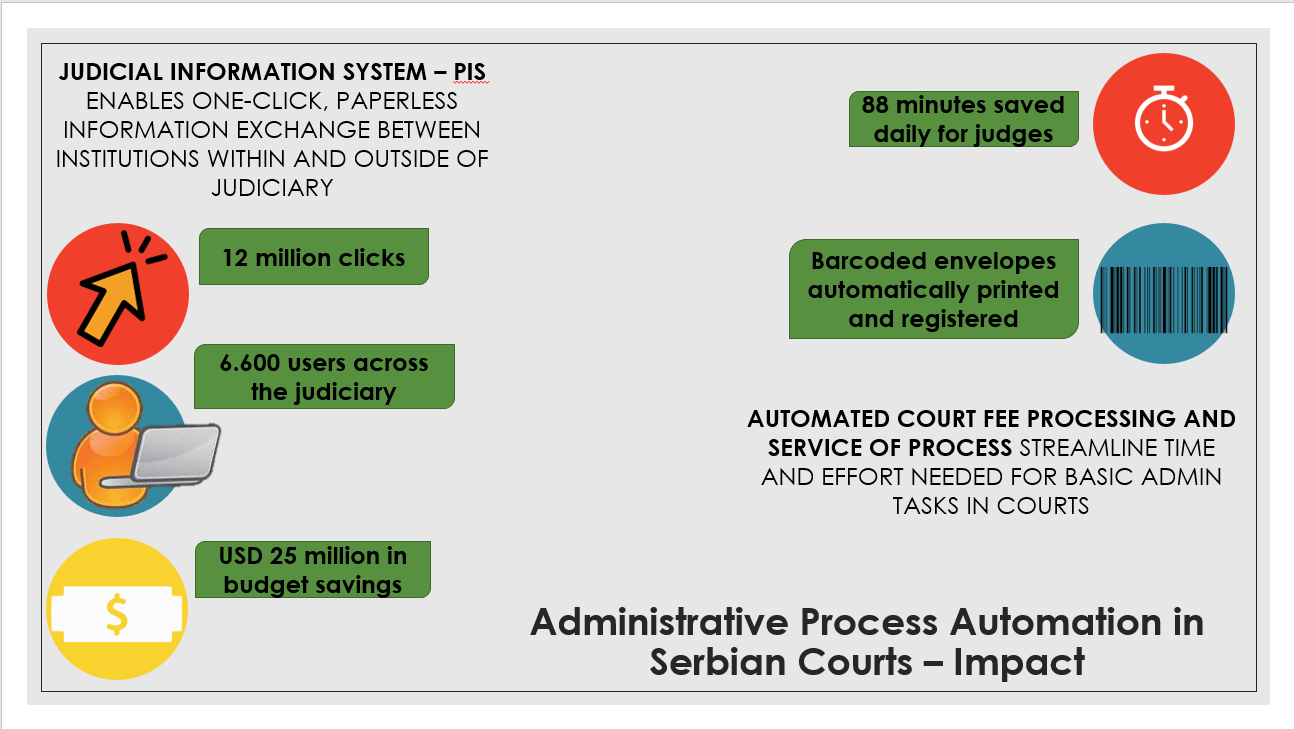 The Judicial Information System, or PIS as it is better known (according to its Serbian acronym), was originally an innovative service developed by the Serbian Ministry of Justice to ensure electronic databases maintained by different institutions are better utilized, and paper-based communication is replaced. The fact that it took up to three months for a simple request by a court addressed to the Police to be answered, for example asking for information as basic as the residential address of a party to a case from the registry maintained by the local police, and all the strain this put on scheduling hearings and ensuring process in due time, was the impetus that led to the creation of PIS. Initially, PIS allowed court access to five different databases. With the support of the DPI led USAID Rule of Law Project, this was expanded to 14 databases maintained by institutions such as the Police, the Pension and Disability Fund, employment records, births, deaths, and marital records, as well as information on bank accounts of both physical and legal entities maintained by the National Bank of Serbia.

After PIS took root in courts and public prosecutor’s offices across Serbia, it was promoted among other legal professions. Public Enforcement Officers, and Notaries Public, as well as the State Attorney’s Office lawyers and staff, use PIS in their daily work for communicating with institutions both inside and outside of the judiciary. It is estimated that with over 6,600 users, and almost 12 million clicks since it became operational, PIS has enabled savings of over 25.5 million dollars, and almost 500,000 staff work days in judiciary and other state institutions. This means roughly 23 million paper inquiries have been replaced with one-click online access to information to date.

USAID support to making administrative operations in the courts more efficient also tackled other avenues besides electronic document exchange. Existing court software was upgraded to enable fully automated service of process procedures, and court fee processing and collection. This was borne out of consultations with judicial stakeholders, including courts, the High Court Council, and the Ministry of Justice, which identified these two areas as plaguing the everyday administrative efficiency of courts, as well as needlessly taking up too much time away from judges and preventing them from dedicating their full attention to substantive high-quality adjudication.

More detials on what benefits automation brings to both courts and citizens can be found in this video:

Under USAID’s Rule of Law Project, the case management software in use in Serbia’s basic and higher courts was upgraded to allow full automation of service of process procedures – including automated printing of preset forms for envelopes, and delivery/return slips, for papers served by the court. Additionally, barcodes are generated so that once documents are served, their status can be automatically recorded in the system, and judges can check if service has been properly effected.

Service of process automation was piloted in two courts – the Basic Court in Nis, and the Third Basic Court. Once it was proven successful, other courts started requesting on-the-job training to implement the automated software solution in their expedition and registry offices. To date, in addition to the two pilot courts, the system is in use in the Higher Court in Novi Pazar, and basic courts in Paracin, Knjazevac, Pozega, and Trstenik.

Software upgrades for electronic calculation, processing, and tracking of collection of court fees, are in use in all basic and higher courts in Serbia. This helped streamline the work of judges and staff, while also allowing for more accurate insight into amounts collected, which was previously lacking. Generation of a unique control number was created for every single court fee calculated, allowing automatic tracking of court fee payments in data provided by the Treasury. This was complemented by creating a centralized court fee application enabling the high-level decision-makers in the judiciary to compare collected vs calculated amounts, and implement system-level measures to further improve court fee collection, a percentage of which is re-invested in the courts.

Although technical and complex in their nature, requiring a lot of groundwork to analyze and distill best practices from courts all around the Serbia, and then translate these to software functionalities, these operational and administrative interventions do change the way courts work, making it easier for the judges and staff to get their jobs done, and for citizens to get more swift and less costly justice. In total, these innovative e-justice interventions, implemented under the USAID’s Rule of Law Project, generated savings of 88 minutes per day per judge in disposing of various administrative tasks, leaving them more time for substantive adjudication.