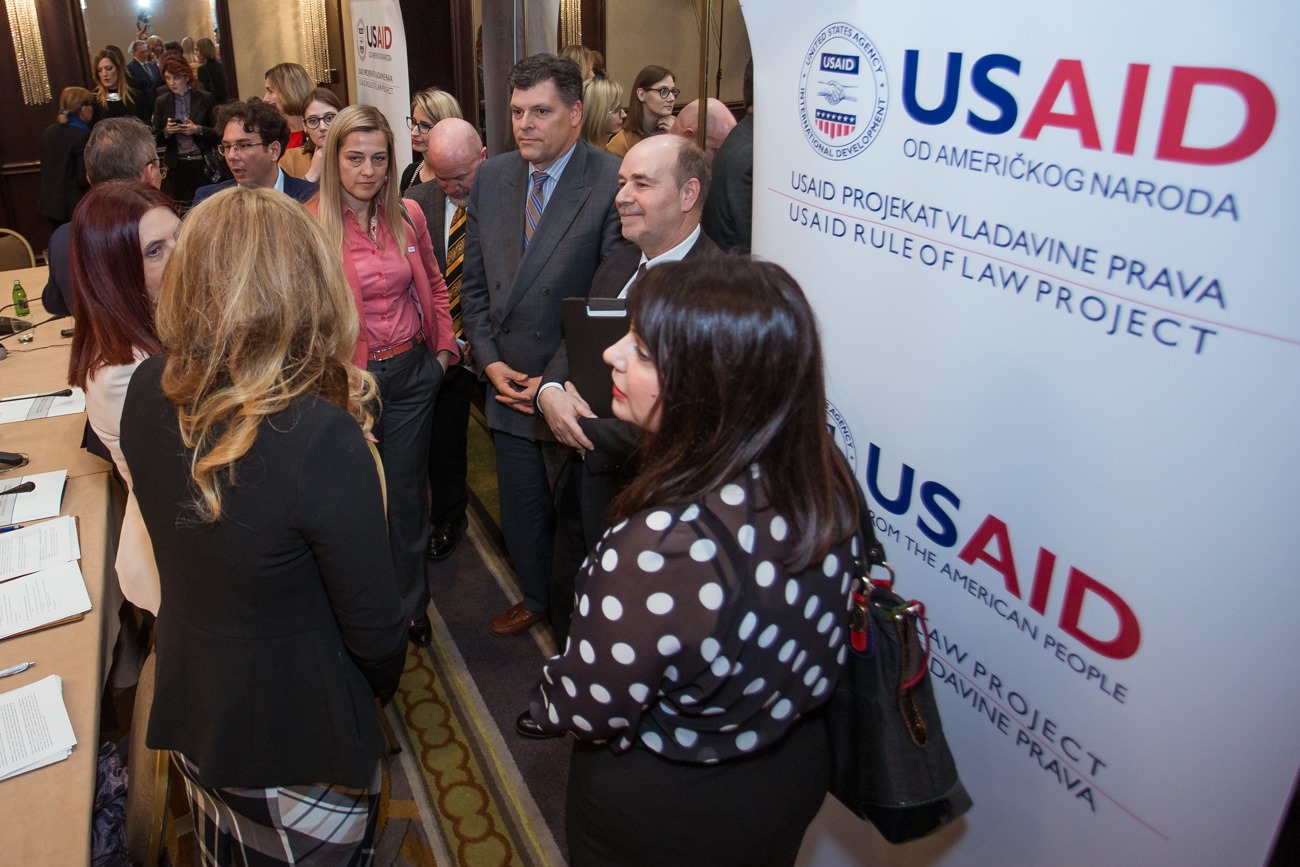 DPI is implementing the Rule of Law Project in Serbia (ROLPS) which is a four-year (2017-2021), $9.8 million initiative which enhances the timely delivery of justice for Serbian citizens. ROLPS works with the courts and the Ministry of Justice to promote the strategic advancement of Serbia’s judicial reform process, increase judicial efficiency, promote access to justice through non-judicial services (public enforcement officers), and build capacity of institutions in the judiciary outside of the court system (State Attorney’s Office).

ROLPS is providing expert assistance by:

a) working with the Ministry of Justice and the courts to continue the strategic advancement of Serbia’s judicial reform process, including drafting the new Judicial Development Strategy;

b) implementing a range of initiatives to support judicial efficiency (improving court operations, and reducing delays in court proceedings), transparency (drafting and facilitating the implementation of the Communication Strategy for the High Court Council and courts), and strengthening the role and career path of judicial assistants;

c) supporting the ongoing improvement of the system for enforcement of judgments, ensuring the timeliness, predictability and integrity of enforcement actions;

d) strengthening institutional capacities of the State Attorney’s Office to improve performance and reduce the time and cost associated with cases brought against the State.

The flexibility to respond to emerging issues in the ever-evolving Serbian justice system is a critical feature of the Project. With a consensus-based approach to decision-making and full stakeholder involvement across the board, ROLPS facilitated an all-inclusive development and public discussion process for the draft 2019-2025 Judicial Development Strategy, and the amendments to the Law on Enforcement and Security. This involved harmonizing the strategic development of the Serbian judiciary with the requirements of the EU negotiations process under Chapter 23, Judiciary and Human Rights, as well as reshaping the system of enforcement of judgments to become more efficient and less costly by introducing electronic services such as e-notice board and e-auction, reinforcing the principle of proportionality in debt collection to protect the most vulnerable categories of debtors, and emphasizing soft collection.

Among the most notable Project achievements to date is expanding the range of data exchange protocols in the Judicial Information System by nine (9), facilitating information exchange between parties to a case, and replacing paper-based communication between courts and other institutions both within and outside of the judiciary (e.g. with Public Enforcement Officers, the Police, the Cadaster, the Pension and Social Security Fund, etc.).

ROLPS also engaged in overall institutional development and capacity building for the State Attorney’s Office, including a five-year Strategic Plan that streamlined and standardized business processes for the Belgrade headquarters and its 11 regional units. This process served as the foundation for full automation through upgrades to the case management system. ROLPS also delivered training and capacity building to improve out-of-court settlement processes that save time and costs for the state and parties.

DPI’s ROLPS involvement also comes in the wake of our previous work, carried under the USAID Judicial Reform and Government Accountability Project (JRGA). The main task of this project (May 2011 – October 2016, $21.8M) was assisting the Government of Serbia to make the administration of justice more efficient, transparent and responsive to the needs of their users, and to increase public awareness about the improvements. Operating as a subcontractor to National Center for State Courts (NCSC), DPI was responsible for coordinating assistance, developing uniform best practices for expansion into multiple courts, and promoting the policy-making changes necessary to improve operations of the courts. DPI supported a Model Courts Program for both the Administrative Court and the Misdemeanor courts to strengthen court leadership and management, train judges and court staff to become better managers, and implement key reforms in their courts. 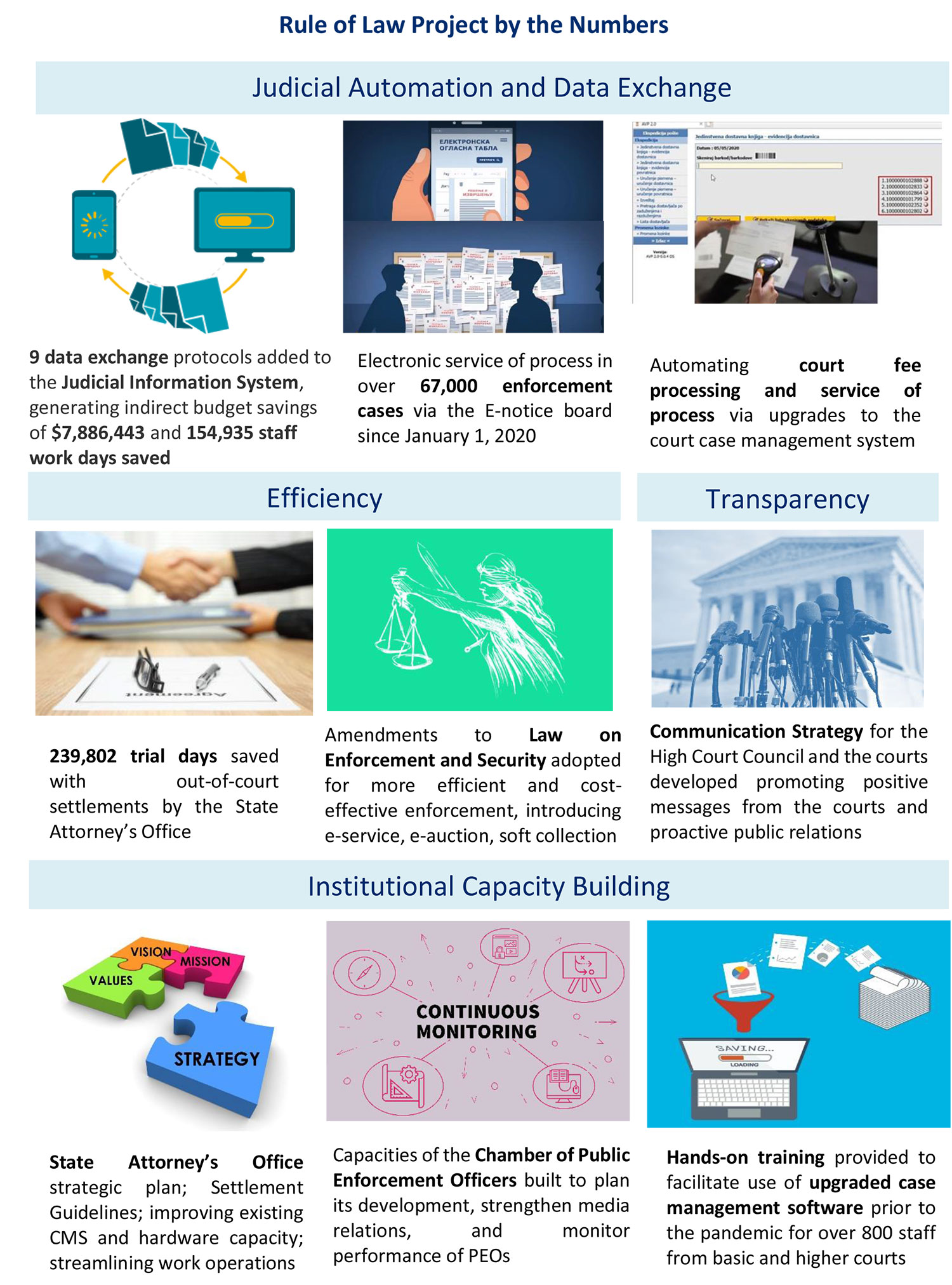 Electronic Notice Board for Enforcement Procedure Goes Live in Serbia

Electronic Services for Judiciary Save Money and Time in Serbia

DPI Assistance Solidifies the Framework for Judicial Reform in Serbia

Support for Court Transparency and Access to Justice in Serbia