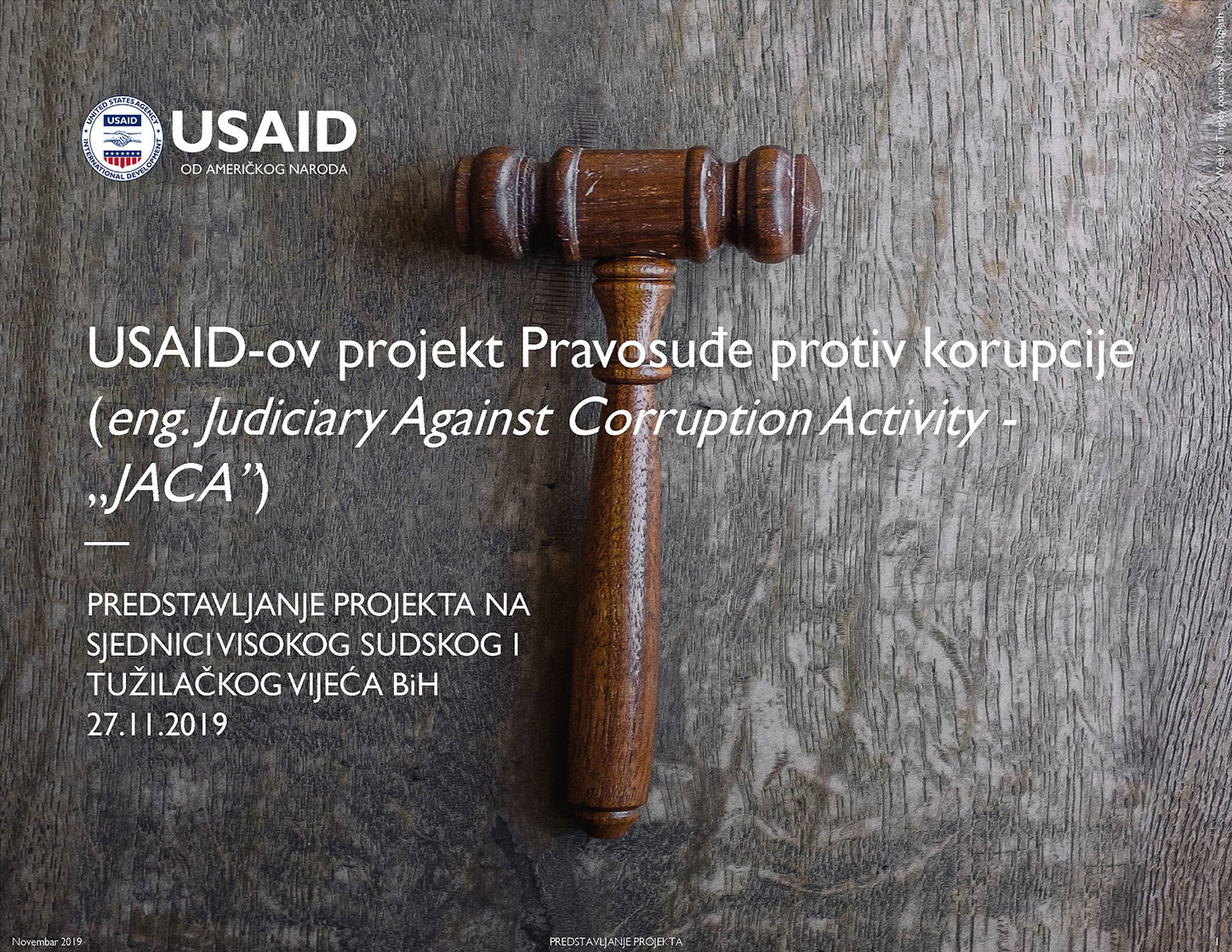 The USAID Judiciary Against Corruption Activity (JACA) in Bosnia and Herzegovina (BiH) is a USD 8 million, five-year rule of law initiative that builds on the recently completed USAID Justice Activity. Between September 2019 and September 2024, JACA is working to further the efforts carried out under the previous project by addressing the policy issues, institutional and capacity gaps, and potential legislative gaps that still impede the judiciary’s ability to successfully tackle high-level corruption and economic and organized crime cases.

JACA is composed of two components:

Component 1: Improving the processing and adjudicating of the most complex high-profile corruption and organized crime cases in selected Prosecutor Offices and courts; and

One of the key elements of JACA’s approach under Component 1 is to build a cadre of well-trained legal professionals who can deliver justice by utilizing the requisite professional knowledge and skills to interpret and apply law and judicial practice to the facts. The project will focus on the management and prosecution of prioritized high-level cases. For Component 2, the approach is to enhance institutional integrity throughout the system and install mechanisms that effectively prevent corrupt behavior in the BiH justice sector. JACA is improving the skills of judges and prosecutors to prepare well-reasoned indictments and decisions.

JACA is bringing increased attention to reform efforts and engaging with the public to improve trust and perception of the government’s ability to address high-level corruption and economic and organized crime, particularly as the public sees an increase in the number of high-level convictions.

For greater impact, the project is working with selected partner institutions – namely cantonal/district prosecutor offices and the corresponding cantonal/district and municipal/basic courts in six distinct geographical areas: Sarajevo, Tuzla, Zenica, Mostar, Bihać, and Banja Luka. JACA also works with entity Supreme Courts and prosecutor offices in both the Federation BiH and Republika Srpska, particularly in areas in which processes and practices need to be harmonized.

JACA success includes identifying 37 prosecutors who committed to proactively and continually participate in a 48-month training program on high-level cases, launched in March 2020. Based on principles of voluntarism, commitment and self-criticism, this presents a new approach to training of prosecutors. JACA also engaged a FBiH Supreme Court judge to work on updating an assessment of training needs for judges (previously developed under JA), which will serve as a basis for developing a specialized training program for judges handling high-level cases.

Previous Work in Bosnia and Herzegovina

DPI’s work on JACA builds on the previously implemented USAID’s Justice Project in Bosnia-Herzegovina. This five-year project (September 2014 – September 2019, $9.4 M) was aimed at achieving more accountable institutions that meet citizen’s needs and make government more responsive by strengthening the capabilities of justice sector actors. The project had three components including:

Judges and Prosecutors on Communicating Important Issues in a Global Crisis

USAID’s Promoting the Rule of Law in Myanmar (PRLM)